A Night Out, Portland Style 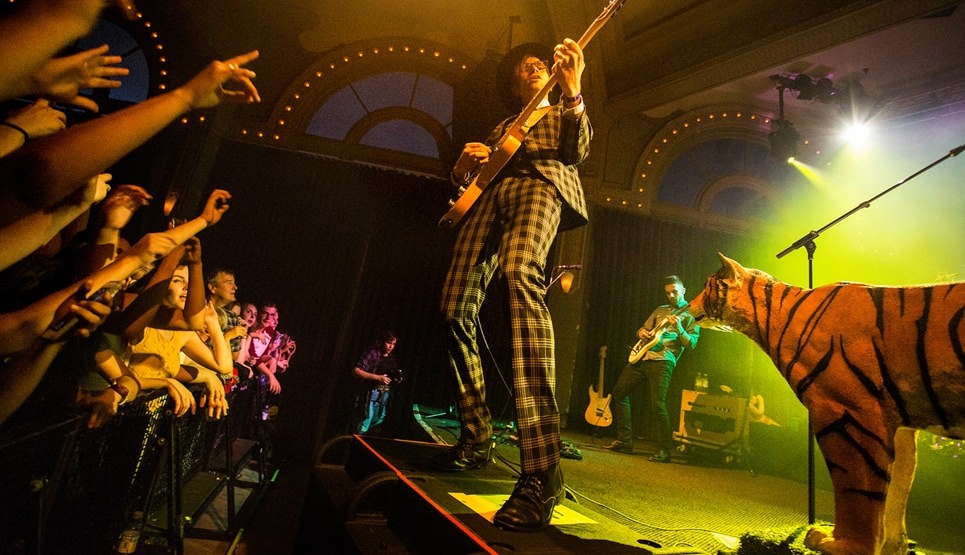 With a reputation for its creativity, enviable lifestyle and casual atmosphere, it’s no surprise Portland offers an equally laid-back nightlife scene. Of course, there’s the ubiquitous James Beard Award-winning cuisine throughout the compact metro area. But beyond this bastion of outrageously good food and drink exists an intoxicating variety of nighttime entertainment: theater, live music, a nationally recognized karaoke scene and the pursuit of simple pleasures for which the city is famous.

Portland’s love of food and unique entertainment has spawned an amalgam of the two with its variety of “brew ’n’ view” theaters. Moviegoers can eat and watch in dozens of unique settings that range from swanky to gritty. The elegant arthouse cinema Living Room Theaters shows foreign and indie films on their six screens, and offers a full menu to enjoy in the theater itself or in the urban lounge out front. The 1948 Academy Theater in Southeast Portland has microbrews and stadium seating, the ’20s-era single-screen Cinema 21 shows foreign and classic films, and the Art Deco Laurelhurst Theater has food and nine beers on tap along with their revival screenings. In Northeast Portland, the nonprofit Hollywood Theatre offers craft beer and pub food along with second-run and indie films; novel lineups have included B Movie Bingo and the popular Kung Fu Theater series. In the town of Forest Grove, the Grand Lodge shows first-run blockbusters in the plush Compass Room.

(B Movie Bingo at the Hollywood Theatre by NashCO)

Live music, every night of the week

The city’s respect for the offbeat artist resounds in its live-music atmosphere. Forget frat romps and dance clubs playing tired pop hits. Lines regularly form outside the historic Crystal Ballroom, which once held Depression-era dance rallies and now hosts a stream of indie rock bands. Downstairs in Lola’s Room, the restless can break loose to house rap beats, high-pitch dub-step synths or head bang to tongue-in-cheek dance themes — like Nirvana’s “Come As You Are.” This is just one of many bars and concert halls in the Greater Portland area operated by McMenamins, which opened the state’s first craft brewpub in 1985. Each pub is housed in a unique and often historic venue, like the off-the-beaten-path Rock Creek Tavern in Hillsboro and the sprawling campus of the historic Edgefield in Troutdale (both host music year-round).

The city’s equal enthusiasm for art rock, punk, baroque rap, jazz and anything in between is reminiscent of the fertile originality that put Portland on the map in the first place. Within the intimate setting of a renovated church, Mississippi Studios hosts a variety of shows, from garage blues and English post-punk to indie folk, along with its burger and drink menu. Those wanting something jazzier can pull up a chair at Solae’s Lounge, an intimate Alberta district mainstay, or catch the latest show by the legendary Mel Brown. And concert-going families should take note: The live-music scene isn’t only for the 21-plus crowd; a few venues regularly host all-ages shows, including the Crystal Ballroom, the Hawthorne Theatre and the Wonder Ballroom.

One of the city’s most creatively astounding atmospheres is found in its die-hard karaoke scene. This is not Margaritaville with a sad, bobbing ball, but a forum where participants — often underrated super talents looking for creative release — perform with fervor. Voicebox offers a modern setting and straightforward karaoke that singers can access from their own phones, while Biny has sushi and pitchers of green tea along with side rooms for private parties. At Dante’s, live bands like local legends Karaoke From Hell might back up someone’s best Black Keys sultry growl. But the real secret to unforgettable karaoke is to trail the roving Baby Ketten, which rotates between a pizza place, bar and private parties. This sui generis performance art is hosted by its creator John Brophy, who mixes his own music and offers every song imaginable — even that David Bowie B-side you thought no one else knew by heart.

Keepin’ it classy after hours

The innovative chill of Portland’s nightlife even pervades the arts. The Portland Art Museum collection and café stays open late on Thursday and Friday nights, and intermittently offers lectures where artists casually discuss their work with the audience. At the Schnitzer, the Oregon Symphony performs full scores of movies that project on a giant screen — hits such as “Back to the Future” and “Harry Potter.” Powell’s Books, the city’s iconic bookstore, regularly hosts robust evening lit groups, as well as readings and lectures by acclaimed writers, artists and thinkers, and is open until 11 p.m. for those wanting to simply grab a coffee or tea and thumb through actual paper books.

Portland’s nightlife strikes that heady balance between verve and chill. This city knows how to kick back without strain or cliche. Like a recent night at Laurelhurst Theater, where a woman stood before the previews, glass of frothy beer in hand, announcing: “Impromptu drinks and discussion after, if anyone is interested.” People raised their glasses to her, and the mood of the audience visibly changed. Even those who didn’t show up later to the heavily wallpapered Euro-style bistro Angel Face got more excited as they watched and dove into their pizza. That’s because this didn’t feel like some stressful or forgettable night out, with its needless hours primping and pruning — no, this felt like Portland. Ready to chill with us?

(Portland Art Museum After Hours by Evrim Icoz)
Is any of the information on this page incorrect? Suggest an update
Ready to hit the road? Bring our travel magazine along.