My wife and I are parents of two young kids. I’m a musician who plays in a couple bands, and I’m also a freelance writer. My wife, Sarah, is an artist, and she’s also a stay-at-home mom. Given our occupations and that neither of us have salaries, we have to be extra careful about money. So we stay as busy as possible and keep a pretty tight budget. And for the most part, that’s fine with us. Except for one thing: travel.

The fact is, traveling as a family of four can be expensive. And that’s too bad, because that’s something we love to do. We want to bring our kids to different places and show them exciting new things.

But then we asked ourselves, what about Oregon?

First, we looked into flights and saw that airfare from Denver (our nearest airport) and Portland was quite affordable. Also, most of the flights were direct — a nice perk when traveling with kids. My wife’s cousin and her family (who we’re very close with) also live in Oregon. So we had the idea that instead of renting hotel rooms, perhaps we could all share a rental house.

The numbers looked promising, so we decided to go for it and put together a big family vacation (on the cheap) in Oregon.

Sarah is from the western U.S. and inspired by the mountains. I’m from New Jersey, and I miss the ocean. In Oregon, we got both mountains and ocean…and more.

We woke up on our first full day in Oregon and hopped in a car and drove west to Cannon Beach. I was warned that it can be cool and gray at the beach. But, personally, that’s just fine with me. It’s been an incredibly hot summer, and my love of the beach is less about sunshine and beach parties, and more about what a magical place the seaside is: where the ocean meets the land, where a wild assortment of creatures and plants come ashore with the tide, where the air is salty and the waves and breeze create a nearly hypnotic sound.

Cannon Beach was like a dream, especially for a sea-deprived person like me. My kids immediately set to work digging in the sand, drawing pictures for the surf to wash away and digging trenches. Sarah and I marveled at the towering rocks rising from the sea, birds congregating and surrounding them. It was misty, but not rainy, and beautiful. Families and couples walked and played and swam and lounged, but there was a quiet beauty to it all. 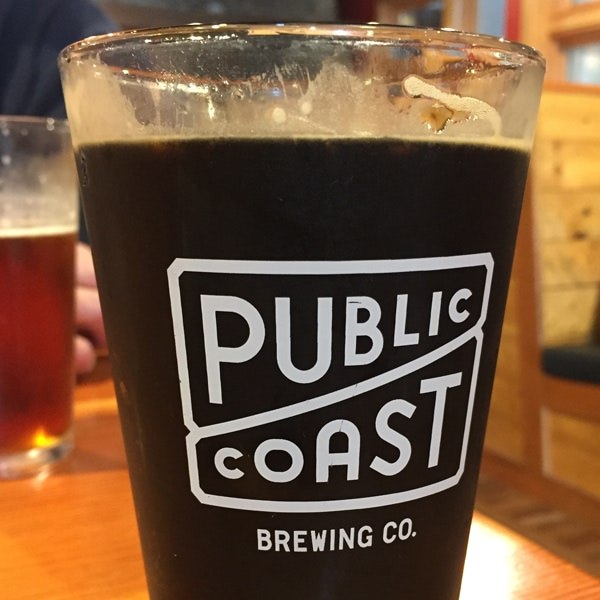 Finally, we tore ourselves from the sand and sea and headed into the quaint little town for lunch at Public Coast Brewing and treats at Bruce’s Candy Kitchen. Years ago, my wife and I briefly lived on the coast of Maine. I grew up less than hour from the shore and was there constantly. This was both a seaside life I missed and did not want to leave.

But, as it was a vacation, we did leave, driving back through mountains and lush green forest. The next day, we pointed our cars east toward the high desert of Oregon. A few short hours later, we arrived at the cottage outside Sunriver, which would afford us easy access to a range of nature spots and more.

I kept having to remind myself that I was in the same state as Cannon Beach. Instead of cool mist and the tides, we were surrounded by desert and dormant volcanoes. One day, we explored the expansive Lava Lands. At five years old, my son is infinitely interested in all thing space and astronaut-related. So he was elated to learn that real astronauts trained and space gear was once tested in this very spot. It was not hard to believe from the otherworldly looks of it. 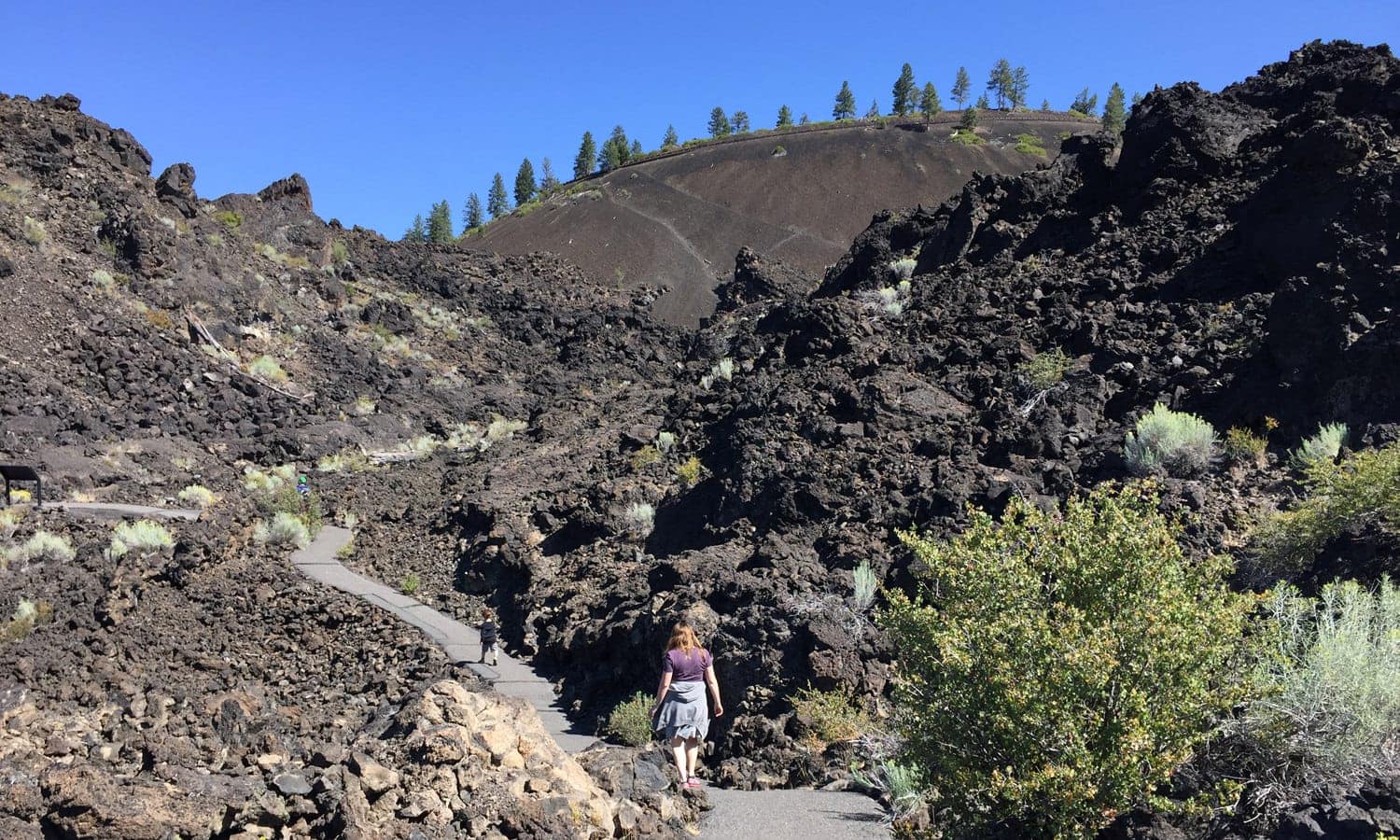 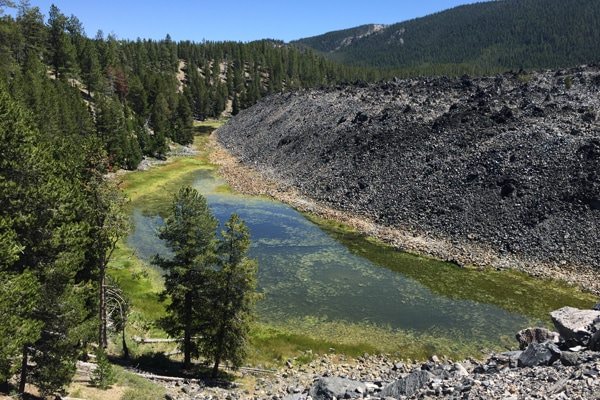 After a picnic lunch, we hiked to the top of the Big Obsidian Flow and marveled at the endless stretches of brilliant black glass and the shimmering ponds set within.

My son was once again transported to other worlds and was soon pretending to be on a planet from the Star Wars universe. 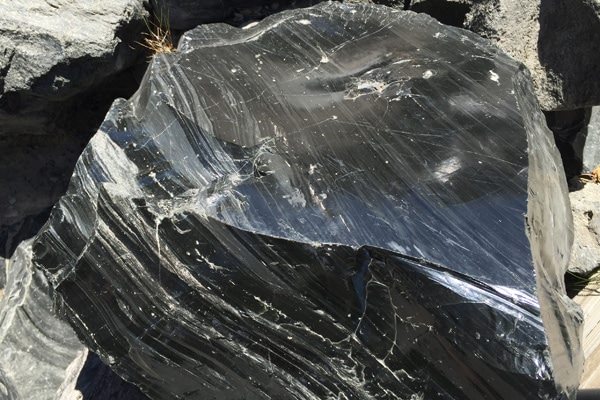 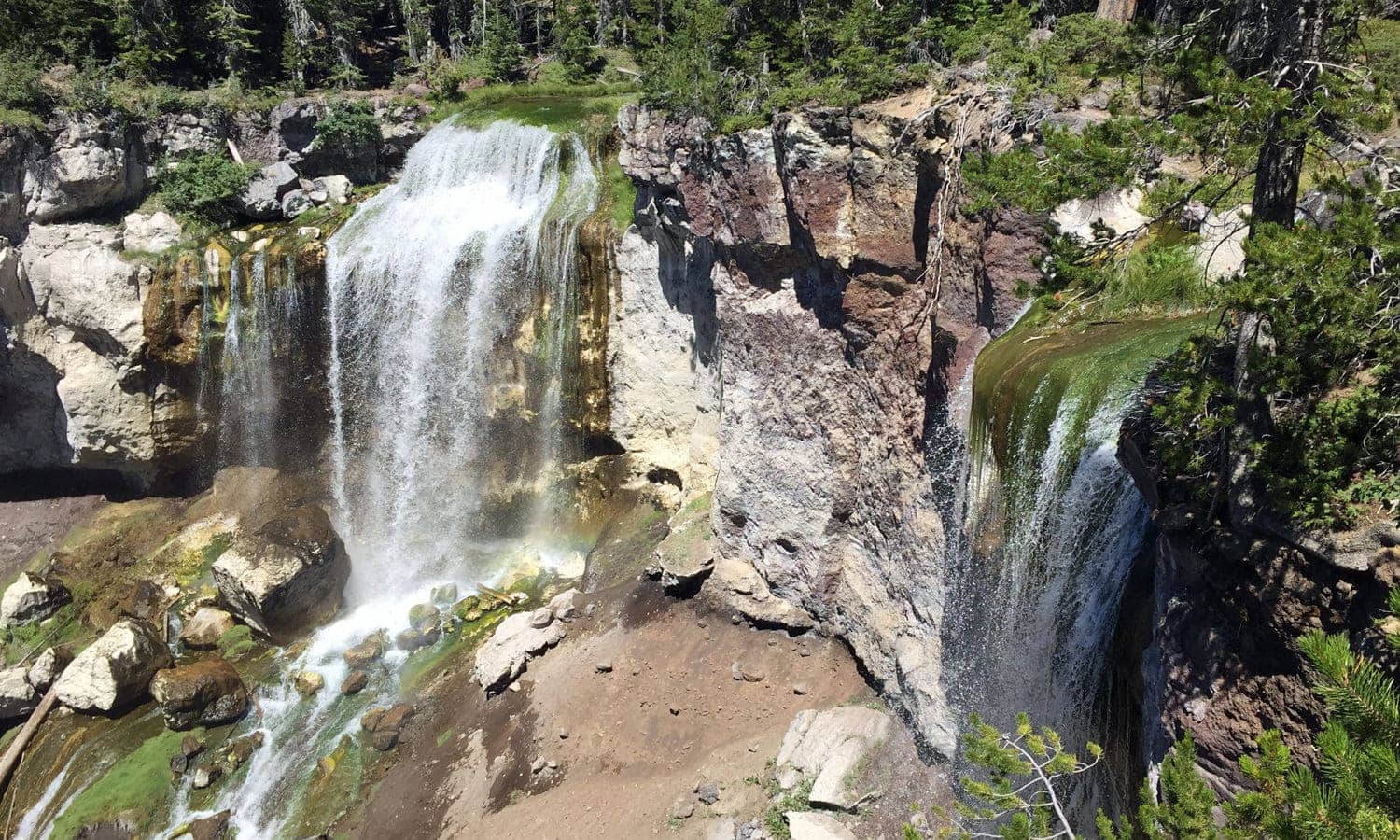 We ended that day with an extremely easy hike down to Paulina Falls.

Picturesque, these waterfalls looked less like they belonged on a planet from a sci-fi movie, but rather an enchanted forest from a fairy tale. 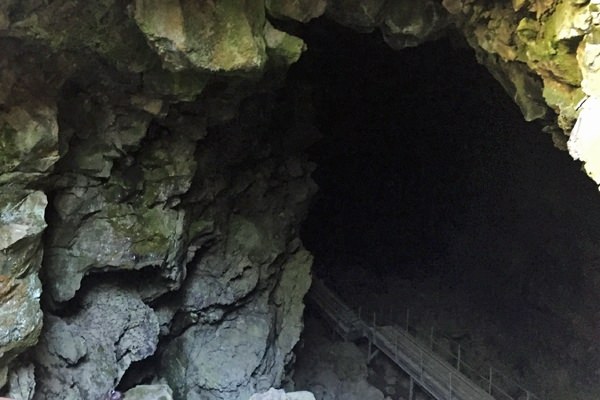 Sarah and I were fascinated by the changing textures of the cave walls and the variations from wide and spacious to narrow (but not too narrow). And we had to pause to appreciate the “Sand Garden,” in which dripping water forms volcanic ash into abstract sculptures.

On another day, we explored the Lava River Cave. It was cold and pitch-black, so we told the kids they’d have to bundle up and carry a lantern. This only fueled their excitement, and they squealed with glee as we descended into the cave, our two-year old daughter occasionally calling out, “Batman, where are you?!” 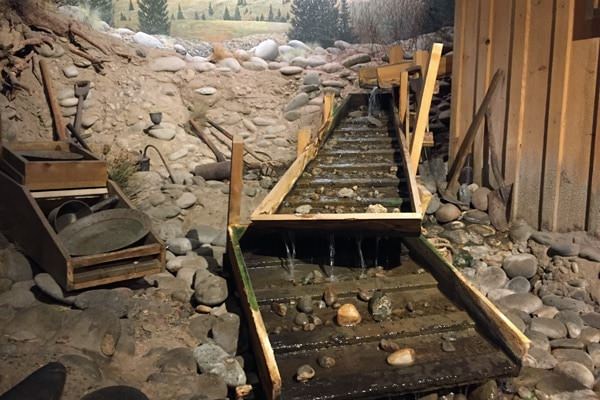 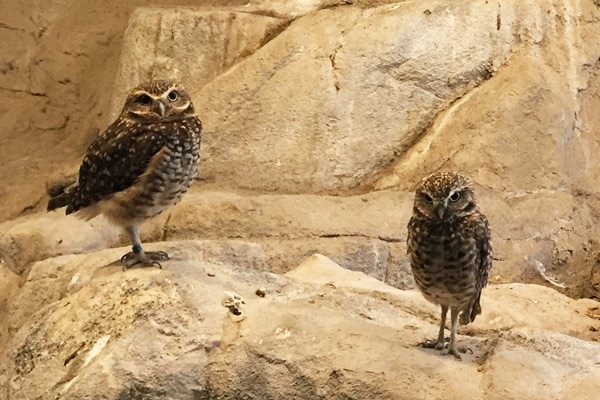 We also got a taste of the past and present-day Oregon at the High Desert Museum, where 135 acres of indoor and outdoor exhibits (and live animals) easily kept the kids entertained.

As we headed back toward Portland after this portion of the trip was over, we stopped off at the Timberline Lodge, where we enjoyed a delicious lunch and a breathtaking walk through alpine flowers up Mt Hood. The kids rushed to smell each flower and mimic each birdsong.

In our search for nature, Oregon delivered…big.

But this trip was not just a nature retreat. Rather, Oregon gave us the chance to explore both Portland and Bend, two cities that I had heard great things about. And now I can see why.

One of the first stops we made after we landed in Portland was to the Oregon Museum of Science and Industry, better known as OMSI, a perfect place for kids of all ages. Our children were immediately inspired and enthralled by the exhibits and the opportunities to interact with many of the museum’s features.

But perhaps their favorite spot of the entire city was Powell’s City of Books. Anyone bemoaning how mobile devices are ruining books for kids should stop by this store. From infants and toddlers to teens (and plenty of adults too), the store is packed with excited and enthusiastic readers and book lovers. My kids and I managed to find a cozy but quiet corner, where I read them a pile of books before deciding on our favorite ones, which I then purchased. 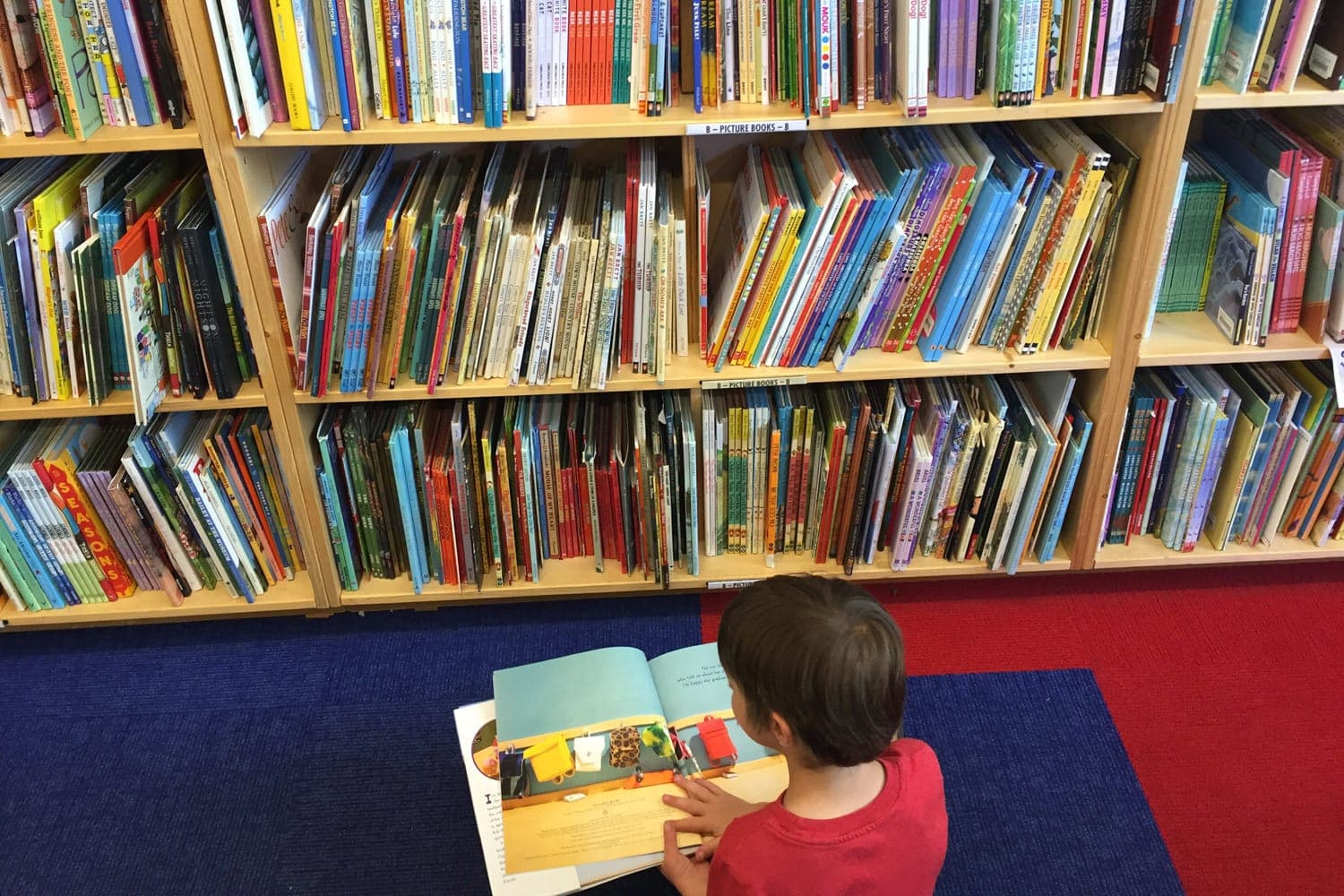 From Powell’s, we headed to a nearby park for a bit of relaxation. Parks abound in Portland, and our kids never met a playground they didn’t love.

My wife was craving a coffee, so I headed over to a nearby bakery, which is a favorite amongst locals: Lovejoy Bakers. After admiring about one hundred different items that we’d have been glad to eat, I ordered and picked up Sarah’s coffee and left. I should mention that not only were the staff of Lovejoy a delight to speak with in person, but the next day when we were home in Colorado, I called them because I could not find the book I bought for my son at Powell’s. I suspected — correctly as it turned out — that I left it at Lovejoy Bakers. I was prepared to implore them to mail it to me if I paid them postage plus a little more for their trouble. But before I could, the person I spoke with asked me for my address and said she’d be mailing it back to me on the house. And before I could thank her, she thanked me for visiting.

Her gesture was emblematic of almost all of our interaction with people in Portland. It was truly one of the happiest, warmest places I’d ever visited. And yet, it had the energy and culture of places like Chicago and Brooklyn.

This is not to forget our time we spent in Bend. In fact, we enjoyed Bend so much, that we moved around our schedule just so we could spend a second day there. Bend was unique in that it had most everything the city had to offer from parks and breweries and restaurants and galleries and arcades, but it was also small enough in that it seemed like we could explore nearly the entire town on foot. The kids loved the Vector Volcano arcade and Goody’s Chocolates factory tour. Sarah and I were partial to Crow’s Feet Commons, Crux Fermentation Project and Deschutes Brewing. As a family, we all loved taking a bit of down-time in downtown at Drake Park.

Any family vacation will cost money. But between getting creative and sharing expenses with family and the already-affordable airfares in and out of Portland, we were astonished by all we got to see, do and experience in Oregon — and that it was easily affordable. In a week, we had walked the beach, the forest and the desert. We’d hiked mountains, and we explored a cave. We went to museums and arcades and breweries and coffee shops and city parks and record shops.

All in all, we went home very happy.

David Obuchowski
David Obuchowski is a freelance writer and a musician. His essays have appeared in Deadspin, Gawker and The Daily Beast. He is the guitar player of post-punk post-metal band, Publicist UK (Relapse Records), and guitar player/singer of indie-metal band, Goes Cube (Old Flame Records, Greenway Records). A native of New Jersey, David now lives in Colorado with his wife (an artist and illustrator) and their son and daughter.

Bend, Central Oregon
Is any of the information on this page incorrect? Suggest an update
Ready to hit the road? Bring our travel magazine along.